“Managing software” and “managing software development” is a complex subject which is surrounded by a lot of bruhahah and fancy marketing presentations full of neat-looking flow charts and ambiguous terminology. I’m trying to establish some common vocabulary so we sort-of know what we’re talking about.

We can identify several common activities which apply to most software management processes.

“SCM” is a marketing term often used by pointy-haired bosses in the business of selling “software consultancy” services to other pointy-haired bosses. It stands for software configuration management, and its mostly about “managing” these different activities by following some sort of process, and integrating that “software process” into a “business process”.

There’s a lot of different terms and phrases for describing this kind of thing, such as CMM(I) (levels 1 through 3) a whole bunch of ISO standards, as well as fancy terms such as “eXtreme Programming” or “agile development” for when you
know CMM is a silly phrase yet you still need to sell your company as “conforming to” or “applying” some sort of process.

There’s also something akin to the “open source software management process” which involves ideas such as “automated everything” and “just use apt-get” which is generally a much more sensible (if under-documented) “process”. Karl Fogel
has written a book on producing open source software which goes into this to some detail (http://producingoss.com/html-chunk/index.html).

In reality, no-one in the real world developing real software really follows the fancy flow charts. A rather generic SCM flowchart which incorporates many common process looks roughly like this: 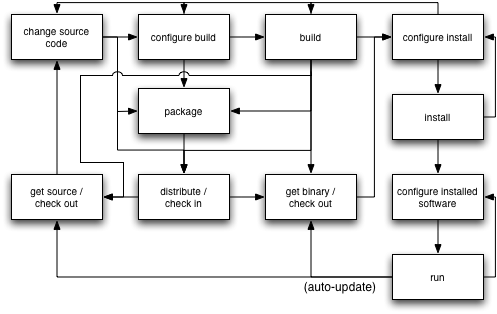 In this chart, each and every step could probably be skipped or replaced by a “no-op”, and some arrows are followed more commonly than others.

For example, most software developers tend to follow an iterative process when writing code. They’ll “switch into development mode”, change some source, rebuild and test the change, change some more source, rebuild and test, check in
the changes, rebuild and test, create a distribution package, “switch to production mode”, get the distribution, build and test it, do some configuration, rebuild, then install. Then when they get called in the middle of
the night because the software just crashed, they’ll often not follow any kind of process at all and do things like change the running program on the live machine.

If the above paragraph sounds confusing, trust me, all this stuff is. “Managing software” is not a simple task. No wonder the average programmer or system administrator has a strong caffeine addiction.